A Review by Gerry McLafferty

Spoiler alert:  There are spoilers here, if you have not viewed the film as yet.  Just to inform you.

Was there an underhand strategy to Colonel Tom Parker taking on Elvis Presley exclusively - a one client / one promoter arrangement?  That is the basis of the movie, as explored by Baz Luhrmann, where almost immediate narration by Parker (as played and voiced by Tom Hanks) leads us into the history of this, oftentimes, uncomfortable and complex relationship.

We are aware that the narration is pointedly directed to the theatre audience, for maximum effect and reaction.  From the jazzy opening sequence taking in Las Vegas highlights we are on a cinematic journey of the highs, lows and very dark moments in the unique pairing that was Elvis and the Colonel.  Could one have survived and progressed without the other?  That’s a question that has been asked so many times over the years, the real answer to which is clearly difficult to truly ascertain.

A significant part of the story is seen in several references to Parker’s ‘Snowmen’s League of America’ - a somewhat mythical ‘organisation’ where Parker indulged his con-man antics on those bewildered individuals who thought they were part of some worthwhile unit.  Parker’s early beginnings as an entrepreneur take us to a nervous Elvis appearing on the Louisiana Hayride in 1955.  Footage of Elvis’s boyhood influences, including at revival meetings, works very well in establishing the type of music he was witness to and how it was to affect his own choices in music direction.  The recreation of 1950’s Beale Street is quite an incredible feat, giving the audience a real taste of the amazing world Elvis was to immerse himself in.  It seemed so entirely appropriate to feature black artists such as B.B. King, Little Richard, Arthur Crudup  and Sister Rosetta Stone as a prominent part of Elvis’s incredible story. The relationship of Elvis with his mother, Gladys, is given a lot of focus – almost to be expected, given the depth of this subject in numerous books and in lesser film biopics.  Losing his mother when he was just twenty-three years old obviously had a profound effect on Elvis and it is documented very emotionally in this telling of the tragic event.  Early concerts on the road with Scotty and Bill provide a definite excitement in examining these seminal times in Elvis’s life.  His eventual surpassing of Hank Snow as headliner on Snow’s tours is well handled, and demonstrates very pointedly his burgeoning rise to fame and music notoriety. 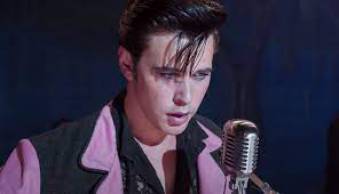 Moving from Sun Records to RCA was the catalyst to Elvis’s stratospheric rise to national, and subsequent, worldwide recognition as a truly gifted musician and entertainer.  The signing, as depicted in the movie, is of course wholly engineered by Parker and even at this early stage in his career, somehow smacks of manipulation.  Gladys’ reluctance to sign the document is spot-on to real events.  She stated clearly that she mistrusted the Colonel in his dealings.  The movie very much reflects that judgement.  It almost becomes even clearer in the scene with the I Love Elvis and I Hate Elvis badges.  Merchandising an individual to extensive lengths seemed to begin with Elvis and it never stopped during his lifetime, nor indeed beyond.  Recreations of Elvis’s appearances on both the Milton Berle Show and the Steve Allen Show are handled very well, with Austin Butler giving an amazing physical account of Elvis’s on-stage movements.  Compelling stuff indeed.  The Russwood Park concert sequence, where we see authorities filming Elvis’s movements for any signs of lewdness, is done very well, building in expectation of just what he is going to say, and more importantly, what he is going to do. 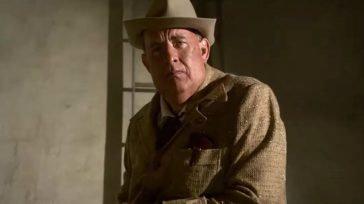 This is a key moment in the story’s structure. The army days and his return to the U.S. and Hollywood is dealt with briefly.  The scene where Austin Butler is cut into the actual footage from Live a Little, Love a Little and the A Little Less Conversation song is extremely well done.  As we move to the 1968 NBC Special this, appropriately, is dealt with quite extensively.  All the ballyhoo about the Colonel insisting on a Christmas-themed show is present.  There’s a lot of license taken over the actual events and the then time-line, but it serves the dramatic storytelling for this particular avenue of biographical presentation.  As in real life, the reaction to Elvis’s return to roots, as it were, with the TV Special, was seen as a monumental moment in his career.  It is made clear that he could only go up from this point.

The recreation of several segments from the Special is extremely well done, and appears immaculate in detail.  Elvis’s return to the concert stage in 1969 in Las Vegas is done with great gusto, and of course serious fans will immediately notice it is based on his actual August 1970 third season at the International Hotel.  By that time there was more flamboyance in the entire set, including with Elvis’s outfits, unlike his summer 1969 return which was more sedate in its setting.

Again, for the purposes of storytelling, it works very well.  That’s a great piece of cinematic drama showing the Colonel setting up a 5-year contract with the Hotel owner, and detailing it all on a tablecloth.  That event is of course wholly accurate and is one of the most incredible ‘contracts’ ever struck in show business.

From the amazingly successful return to live performing, we see something of a decline in Elvis’s enthusiasm as he is thwarted at every turn in his desire to perform in other countries.  A look at the Colonel’s mysterious background blends with his consistent, yet always explained, refusal to arrange such tours for Elvis.  His insistence that American shores provide enough scope for their needs seemed to speak to Elvis – however reluctant he may have been initially.  The on-stage tirade where Elvis fires the Colonel was of course entirely fabricated, but he did fire him after a Las Vegas show in 1973 – only to take him back after several days when Vernon Presley convinced him that they would owe him too much money.  This outcome was depicted in the film.  This event has always posed that huge question – would Elvis’s career have gone a completely different route if he had stuck to his original decision and sacked the Colonel for good?  We’ll never know.  The film does not greatly focus on Elvis’s physical decline really until the final poignant scenes where Austin Butler performs Unchained Melody on the piano, and the footage segues into the actual June 1977 CBS film of Elvis himself.  Beautifully done, highly emotional and very unexpected.  Continuing with film of Elvis through the years seems the perfect finale, and an on-screen coda explaining Parker’s questionable financial dealings and subsequent legal battles and dismissal from Elvis Presley Enterprises tells us a clear, and very sad, part of the fascinating story of ‘Two odd lonely children’ - to quote Tom Hanks as Parker. 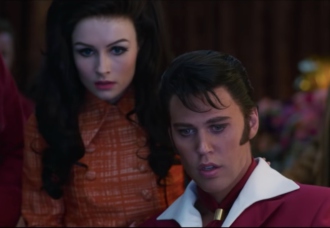 So, to the makers and performers of Elvis.  Director Baz Luhrmann has quite a pedigree of movies, such as Romeo + Juliet; Moulin Rouge! and The Great Gatsby among others to his credit.  He co-wrote the script for Elvis and very much immersed himself in the entire production – seeking out every bit of relevant information he could find on his subject, and all with the approval of EPE of course.  Tom Hanks portrays Tom Parker with a mischievous flair, capturing recognisable elements of the man.  From a personal viewpoint, I have no idea why he chose such a strange accent.  I don’t feel that worked at all.  Yes, we know Parker arrived from Holland around 1930 or so, but all through his time as Elvis’s manager he spoke with an American accent.  This will remain a puzzler.

Austin Butler has received nothing but praise from reviewers and justifiably so.  He worked for two solid years doing nothing but familiarising himself with everything Elvis. As a result, he truly encapsulates the spirit of Elvis in such a compelling manner.  In terms of his physical interpretation he was outstanding, channelling Elvis’s movements, his mannerisms and stage routines in a very precise manner.  He may very well be the recipient of several awards down the line for his incredible performance, and if so, they will be very much justified.  As for the music, well quite a portion is by Elvis himself of course; some vocals by Austin Butler and there is a hybrid of both vocals also heard on the soundtrack.  The choice of songs works well and must surely provide non-fans (cinemagoers) with a great cross-section of Elvis’s music.  This is, after all, the story of an exceptionally gifted artist, driven by an equally exceptional love of music in many forms.

Overall, this is an amazing film; a positive portrait of Elvis Presley – the man and the artist. It is lively, it is sad and emotional and is a telling account of how one man’s dreams can be reached, even surpassed, and then somehow taken away.  Forget the inaccuracies – we know Elvis didn’t have Graceland in 1956; he didn’t have the Lisa Marie plane until 1975; he didn’t ever perform in Las Vegas for six-week stints; the International Hotel changed to the Las Vegas Hilton in 1971 etc. etc.  That isn’t important.  These facts are altered for dramatic reconstruction to ensure more consistent framing of events.  What matters is the reaction to the production as a storytelling event.  In that area, it all works perfectly.