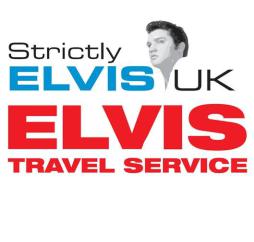 Strictly Elvis UK is more than just a website, it’s an organisation that brings together ‘the best of the best’ with regard to Elvis events and holidays, information, publications, other websites, social media, independent fan clubs and merchandise. We have regular printed Newsletters that are mailed out to our vast database together with the latest tour brochures, merchandise offers, and details of Elvis events around the UK.  Our aim is to offer Elvis fans top class events and holidays, to provide information about other Elvis organisations and to help spread the word regarding the life of Elvis Presley – his recordings, concert performances, movies and much more besides. Elvis left us early, far too early, but he left us all a wonderful legacy that we at Strictly Elvis want to protect whilst sharing the enjoyment of this with as many people as is possible.

Strictly Elvis UK was started in 2009 as a result of the long-established Elvis Travel Service and the Elvis in Wales Fan Club joining forces to put the REAL Elvis into the Porthcawl Elvis Festival which, surprisingly perhaps, whilst held in Elvis’ name, featured only Elvis Tribute Artists and it was rare even to hear Elvis’ voice. We took this as a challenge and so during the Festival took over the function room of the largest hotel in this pretty resort and put on an all-day free admission Elvis Open House followed by an all-Elvis Video Disco – complete with Star Guest and an Elvis Charity Auction. It was a tremendous success proving to us what perhaps we already knew – that true Elvis fans will always prefer ‘the real thing’.  Strictly Elvis was born.

Since then we have continued to add to our portfolio of events, in particular with the fabulously successful Elvis Gospel Concerts in Llandaff and Coventry Cathedrals and the magnificent Brangwyn Hall in Swansea featuring Elvis’ Imperials and the amazing Morriston Orpheus Male Voice Choir; hosting ‘An Audience with…Elvis’ Imperials’ at the Mitchell Theatre in Glasgow and arranging guest appearances, book signings, art exhibitions and Gala Evenings, Charity Balls, Party Cruises and numerous other events both here in the UK, in Europe and in the USA. 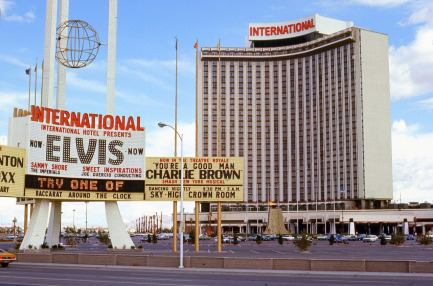 The Elvis Travel Service was started by Elvis fan turned travel professional David Wade in the early 1970’s – then working with the British Fan Club to take members on Weekend Convention Breaks to Europe and to see Elvis performing in the USA. Indeed it was through David’s persistence and negotiating skills with the charter airlines that so many British fans got to see Elvis ‘live’ and it was one of the highlights of his life that he got to meet Elvis personally. During the nearly 50 years since then, the Travel Service has been responsible for some of the most amazing and enjoyable holidays imaginable especially the annual tours to Memphis, Tupelo and points yonder (including Las Vegas, Nashville, New York, Dallas, Los Angeles, San Francisco, New Orleans, Niagara Falls, Toronto, Hawaii, Orlando and lots more besides). One of these holidays, the 25th Anniversary Tour in August 2002, became the largest ever single group tour to the USA in history when 1017 fans travelled to Memphis on one day. The Travel Service was also responsible for the introduction of the week-long Elvis Festival, the Elvis Spring Break and holidays to Europe including visits to Luxembourg and Bad Nauheim in Germany where Elvis lived whilst serving in the US Army. Working with national newspapers, overseas fan clubs and promoting the Elvis tours by all means possible the Elvis Travel Service built up a vast following of like-minded fans and as a result lasting friendships have been made, fans have met and married and we now have second and even third generation fans travelling on these exclusive holidays.

Not many people realise that David Wade has had one of the most distinguished careers in the travel industry – always an ideas man and always wanting to push the boundaries. David was the person to develop newspaper sponsored reader holidays, becoming the first tour operator to enter China when the ‘Bamboo Curtain’ was lifted, the first to offer Calais Day Trips (trust him to have invented the ‘Booze Cruise’!), the first to offer Weekend Breaks in the USA and the first person (and sadly the last) to charter the British Airways Concorde. There are many other ‘firsts’ to his name but his proudest achievement is taking fans to see their, and his, idol…Elvis Presley.

The Elvis Travel Service remains in good hands, with David Wade still at the helm, more than ably assisted by Carol Pugh, Neil Cameron and a whole team of tour managers, event organisers, technicians and DJ’s. All are fans with a vast knowledge and love of Elvis. They also know what other Elvis fans want and expect from an Elvis holiday or event and they have the experience, the contacts and have built the reputation that other organisations could only dream of achieving. 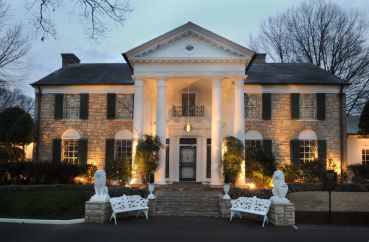 EPE do a sterling job in meeting the needs of Elvis fans….how many other star’s homes would still be open to fans nearly 40 years after their death? Or have so many of his treasured possessions held for us all to see, or still be arranging concerts and so many events in his honour? No, there will always be those who criticise (as with any successful organisation) but if it wasn’t for the long-term vision of EPE the world for the Elvis fan would be a far poorer place and we applaud them for their efforts.

Strictly Elvis UK and the Elvis Travel Service are proud of their strong association with Elvis Presley Enterprises and are Licensed by them for all the holidays and events. Fans can book the 5 Star Guest House at Graceland through us and those wishing to get married, or renew their Wedding Vows, can also book Graceland’s Chapel in the Woods through Strictly Elvis – complete with Minister, flowers, photographer and any other arrangements required.

During the Elvis Presley – in Concert tour of 2012 it was Strictly Elvis who were chosen to host a Graceland and Memphis & Mississippi/Tennessee Tourism stand at each venue, handing out over a ton of literature and answering questions about these destinations – after all we are the acknowledged experts. Strictly Elvis was also chosen to launch the new concert tour, Elvis Presley – On Stage coming to the UK in May 2014 and in November 2014 and helped launch the highly succesful Elvis at the O2 exhibition in London, being part of the management team for this amazing concept. 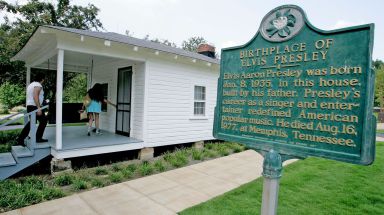 Tupelo and the Elvis Presley Birthplace

The Elvis Travel Service have been taking fans to the Birthplace since long before it was opened to the public and we have watched and encouraged as the people of Tupelo have restored and developed the Birthplace site. And they’ve done it with a quality and taste that befits Elvis’ heritage. Tupelo is proud of its famous (and favourite) son and they welcome his fans with open arms. There is just so much to see and do that has an Elvis connection in Tupelo and visitors are encouraged to stay one, two or even three nights if their holiday plans will allow it – indeed our August tours now always include a stay which allows for more sightseeing and relaxing in what really is the friendliest city in America’s ‘Deep South’.

The Birthplace site now consists of the original, wooden ‘shotgun shack’ home that Elvis was born in and which visitors are welcome to go inside. There’s also an award-winning Elvis Museum containing many unique pieces owned by Mrs Janelle McComb, long time friend of Elvis and the Presley family and who was the driving force behind the development of the Birthplace. Then there’s the Elvis Presley Memorial Chapel built with donations from fans from all over the world, the original Assembly of God Church that Elvis first worshipped in (and which was actually moved from its original site two streets away!), a Visitor Centre and Gift Shop – all within tastefully landscaped grounds containing a fountain, a story wall and a wonderful statue of Elvis at 13yrs…the age he was when he and his parents moved to Memphis. Recent additions to the complex include a full size theatre, meeting space, a small café, an outdoor amphitheatre, scenic walk and additional statues.

Away from the Birthplace you can follow the story of Elvis’ life here in Tupelo with all of the major sights clearly marked with a plaque. Visit the two schools that he attended, Lawhon Elementary and Milam Junior High, Johnnies Drive In where Elvis would enjoy his favourite RC cola, the Swimming Hole on aptly named Mud Creek, Tupelo Hardware where Gladys bought Elvis his first guitar, and the new statue entitled ‘The Hands’ that depicts Elvis reaching out to his fans during the 1955 Tupelo concert which is located on the old Fairgrounds site. All of these sights and more are included on the Elvis Travel Service’s tours to Tupelo but if you travel independently make sure you also call in at the Tupelo CVB (Tourist Information) office where Director Neal McCoy and his brilliant staff will be delighted to provide maps, information leaflets and to answer any questions you may have. 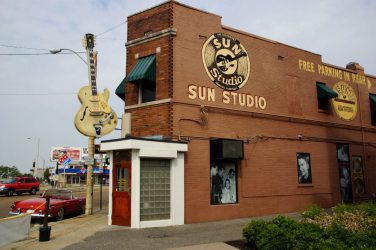 It’s where Rock’n’Roll was born but it’s more than that – it’s where musical history was made, where the legendary Sam Phillips heard the voice of Elvis Presley and launched his amazing career. Sam had found in Elvis someone with rhythm, versatility and a great voice. The ‘bonus’ was that he’d found a singer with an outrageous sense of style as well as Hollywood good looks!

After Graceland and the Mississippi River, Sun Studio is probably the next most widely visited and photographed attraction in Memphis and you can take a tour of the studio and actually stand on the same spot that Elvis did when recording ‘That’s All Right Mama’ or ‘Blue Suede Shoes’. Strictly Elvis is the UK agent for Sun Studio and are happy to answer any questions about the Studio or even book a tour for you.

Strictly Elvis can also arrange for UK singers and bands to rent the Studio at night (after the visitors have gone) complete with sound recording equipment and sound engineers so that they too can say that they have recorded at the legendary Sun Studio in Memphis, Tennessee just like Elvis!