A great selection of Elvis items to purchase 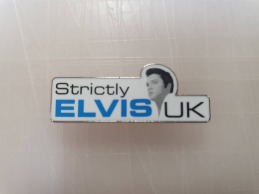 Show the world you're part of the Strictly Elvis Family with this fabulous pin badge.

These fantastic enamel badges look great on a jacket, jumper, bag or lapel. 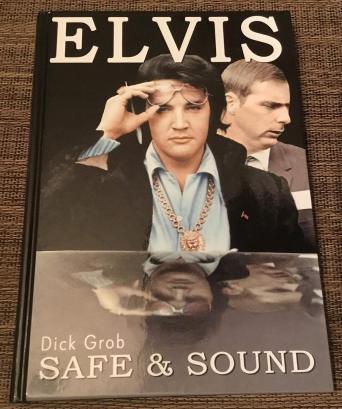 Dick Grob first met Elvis in 1967, when Elvis was on his honeymoon in Palm Springs, California. At the time, Dick was a Palm Springs Police Officer and was assigned to provide personal protection to the 'Star'. Thus began a friendship that lasted for more than ten years.

Dick is no stranger to the field of personal protection. During his career, Dick has worked with the FBI, CIA, and other government agencies, including the U.S. State Department, providing protection to very high profile dignitaries, including U.S Presidents and Vice Presidents, and protection for foreign heads of state such as Marshal Tito of Yugoslavia, England’s Prince Phillip, and Deputy Prime Minister Yigal Ailon of Israel when they visited Palm Springs. Palm Springs was the playground of the 'stars and dignitaries', many of whom Dick provided personal security, and Elvis was no exception.

After providing security to Elvis during his visits to Palm Springs, Elvis made Dick 'an offer he could not refuse' as his full time personal bodyguard and eventually Elvis’ Chief of Security. In this capacity, Dick planned the security for all of his concert tours, appearances, and vacations to locations like Vail, Colorado and Hawaii. Dick was responsible for the safety of not only Elvis, but for his daughter, Lisa Marie, and the rest of Elvis’ family.

'Elvis Safe & Sound', Dick’s new book, tells some of the stories experienced by the author over his ten year relationship with Elvis. Not only was Dick Elvis’ bodyguard and Chief of Security, he was Elvis’ close personal friend. Some of his stories are funny; some are scary; other’s just plain interesting.

'Elvis Safe & Sound' is jammed-packed with Dick’s personal descriptive accounts of his time with Elvis. It includes documents from Dick’s personal archives as well as rare, never before seen photos of Elvis on stage, and copyrighted documents and photos (in color and black and white). 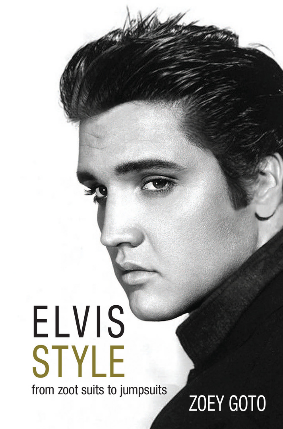 Elvis Style is a celebration of the aesthetic world of Elvis Presley. As one of the most significant pop icons of the 20th century, Elvis’s impact on the music world has been widely discussed and analysed. Surprisingly, however, his influence on design and fashion remains largely overlooked. Elvis Style investigates why Elvis was, and continues to be, an icon of style, focusing on his wonderfully expressive hairstyles, clothes, cars, and interiors. Elvis Style offers the reader an intriguing and insightful journey though the crazy, cool and at times kitsch world of a true megastar. Contemporary design experts have been interviewed to offer fresh insights into Elvis’s style choices. These include Sex and the City stylist Patricia Fields, costume designer Deborah Nadoolman Landis (Michael Jackson’s Thriller) Oscar-winning costume designer Mark Bridges (The Artist), the British celebrity hairdresser Trevor Sorbie, Andy Lecompte (Madonna’s hairstylist), Savile Row tailor Edward Sexton, Andy Spade (Jack Spade and Kate Spade brands) academics from the University of Mississippi, the Victoria & Albert Museum, George Barris (creator of the Batmobile and Elvis’s personal car-customiser) and Hal Lansky of Lansky Brothers (Elvis’s favourite tailoring house) who has also provided the foreword for Elvis Style. Elvis Style includes around 150 photos, many of which are full colour and show rarely seen before Elvis-worn garments, interiors and cars from Elvis’s extensive private collection.

ALL COPIES WITH SIGNED BOOKPLATE BY THE AUTHOR 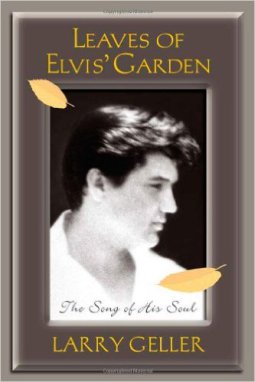 The Most Revealing Elvis Book You'll Ever Read

Literally hundreds of books and millions of words have been written about the phenomenon that was Elvis Presley. None even approaches what is revealed in this one - because this is the one story Elvis made Larry Geller promise to tell. It was Larry who sat in meditation with Elvis for hours at a time or for brief moments before a show. It was Larry whom Elvis could talk with about his deepest beliefs. And so, Larry became one of Elvis' closest confidants. He knew a side of Elvis that few others knew, and fewer understood.

Many books tell what Elvis did. This one tells what Elvis believed. When you plumb the depths of Elvis' soul as it is revealed here, you will understand the real Elvis. You will know him, and very likely, love him even more.
You will read passages from his favorite books, with quotes and pictures of the philosophers and spiritual thinkers he admired: Paramahansa Yogananda, Kahlil Gibran and many others. You will view photographs of never-before-seen actual pages from some of those books, including The Prophet, with notes and comments in his own handwriting. Maybe best of all, you will listen in on intimate conversations that Elvis and Larry shared on a myriad of subjects over the years, including his feelings about the women in his life, the future of his career and life after death.
All copies have been personally signed by Larry Geller
Price: £11.95 (includes P&P)
Order by calling 01473 621 564 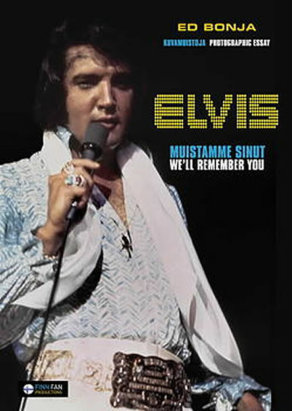 We'll Remember You' by Ed Bonja is hardback book that contains many unseen photos of the King of Rock 'n' Roll and is limited to 1000 copies. Photos for this publication were taken by Ed Bonja, who worked as Tour Manager and Official Photographer from 1970 to 1977. During that period he took some 10,000 photos of Elvis and various happenings in conjunction with the tours and engagements. Ed's photos were routinely used on all kinds of souvenir materials promoting Elvis' tours, Las Vegas and Lake Tahoe engagements. In addition, most photos used on the single and LP covers from the 70's are from Ed. 'Elvis : We'll Remember You' covers years 1970-1975 including various tours, photos from Las Vegas Hilton Engagements and photos of crew members and musicians alike.

The book is divided in four different categories. These chapters allow you to take a look also behind the scenes. Over 200 full color pages, we see Elvis meeting fans, on and off stage, sometimes receiving gifts and awards. Roadies can be seen taking care of business and helping the organization their own way, as well as Colonel Parker relaxing at his home in Palm Springs or playing Santa for Hilton employees children. Included are the photos Ed took at Graceland when went there to take pictures for the live album cover. Not to forget The King himself, you'll see Elvis on stage doing what he loved to do, entertaining.

Text in the book is in both Finnish and English, which makes this book international. Naturally, photos speak for themselves and cross all language barriers. Ed is a fantastic story teller and his vivid memories are integral part of this book. This is not an ordinary photo-album-style book, this is a photographic essay which tells the Elvis story in many ways, particularly through the lens of Ed Bonja. 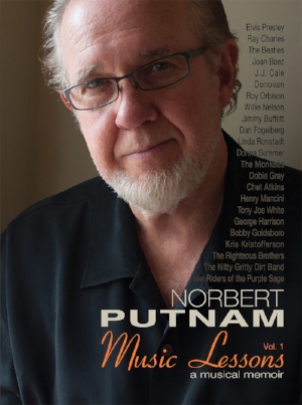 IT WAS THE SUMMER OF 1957, and 15-year-old Norbert Putnam was hunkered down with his father behind their garage in Florence, Alabama. Norbert had started playing bass in a local band and his father was dead set against it so he had pulled his young son aside to reveal a dark secret from his past - he had once played “that damned old bass” in the Beale Street bars of Memphis. He recalled the shootings, gambling, wild women, reefer heads, dirty hotel rooms, lack of pay . . . all recited with tremendous gusto, in an effort to frighten young Norbert. He wanted to convince him to pursue the path to college and a “normal, happy life.” The young man tried to remain still in an effort to withhold his excitement as visions of Memphis and music danced in his head. In spite of his father's intentions, at that moment an opposite decision was made. Norbert Putnam vowed, then and there, to devoted his life to the pursuit of music.

Fast forward almost 50 years, and Norbert Putnam, after a sterling career, is still immersed in the  business of music. He resides, once again, in Florence, Alabama with his lovely wife of 27 years, Sheryl, and their beautiful and devoted poodles, Sophie and Gracie.

With the release this year of his first memoir, “Music Lessons” he looks back on a career unrivaled in its diversity. As a studio musician, he was one of the original Muscle Shoals Rhythm Section players, helping creating the famous “Muscle Shoals sound” and putting this small Alabama town on the map with the 1962 Arthur Alexander hit, “You Better Move On.” Backing up Tommy Roe, The Righteous Brothers and four other American acts, they opened for The Beatles when the lads played their first American concert on February 11, 1964 in Washington, DC. After moving to Nashville in 1965 Norbert played bass on over 9,000 tracks with the likes of Elvis Presley, Ray Charles, Waylon Jennings, Willie Nelson, Dolly Parton, Roy Orbison, George Harrison, Henry Mancini, Al Hirt, Linda Ronstadt, JJ Cale, Tony Joe White, The Monkees, and many others.

Told with Norbert Putnam’s affable storytelling style, “Music Lessons” is at once a warm and laugh-out-loud funny romp through music history, packed with stories about some of the greatest musicians in the business.

All copies have been personally signed by Norbet Putnam 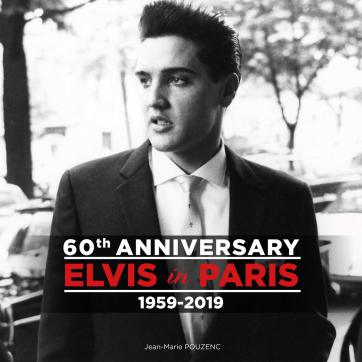 A special edition softback limited edition jubilee edition of the book 'Elvis In Paris' that highlights Elvis' visit to Paris in 1959. The release by the French Elvis My Happiness fan club in collaboration with LMLR is a 60-year anniversary edition of the book Elvis à Paris. This new softback edition is a luxury edition with more than 400 photos and memorabilia, including newly discovered documents and testimonials. The English text tells about the visits of Elvis Presley.

Elvis visit to Paris was an extraordinary event; he was drafted with the US forces in Germany, but the capital city of France is the only place, outside the United States, that he went to on his own. And more surprisingly yet, he did so three times!

In June and July 1959 then in January 1960. He will later often confide in his friends that these visits to Paris will always remain one of his best memories.

With 160 pages… you will see The King in Paris… at The Champs-Élysées, at the press conference at The Hotel Prince de Galles, during nights out at the Folies- Bergères, the Moulin Rouge and The Lido. 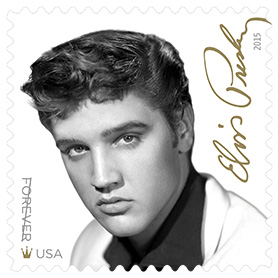 Genuine postal stamps of Elvis' second appearance on a USPS Stamp. These fabulous collectors items were released in the USA in 2015 and Strictly Elvis have a supply of them. Each stamp comes mounted on a special collectors card, perfect for displaying or framing. Supplies are limited - order today.